We lost Aggie this morning.

After several months of dealing with her dementia on top of her neurological issues, it became more and more obvious that it would soon be time to help her to the Bridge.

So, this morning, we helped her on her journey.

Aggie came to us over two years ago from a shelter in Oklahoma, by way of a very kind lady who does much rescue transport. We met at McDonald's in Hillsboro, and saw Aggie for the first time. She was what I would call a Deagle (Dachshund x Beagle) and was a deaf senior. Sadly, at the time, we didn't realize there was a neurological component involved as well.

Over the last two years we've all dealt with Aggie's quirks and difficulties, and I'll be the first one to say she was a very hard dog to live with.

Whether it was her deafness or the neurological problems, Aggie didn't interact much at all with people and virtually not at all with the other dogs. In a lot of ways, Randall and I feel guilty because we couldn't do more for her. We gave her two more years, but all I can say is she was allowed to live them on her own terms.

I wish we could have done more, but when the morning was gone and Aggie with it, I knew there would be a very different dog at the Bridge. Young, healthy, no longer deaf, interactive and, most importantly, mentally healthy and at peace.

I wonder if, when the time comes, I'll recognize her. I hope so. And I hope she recognizes me. 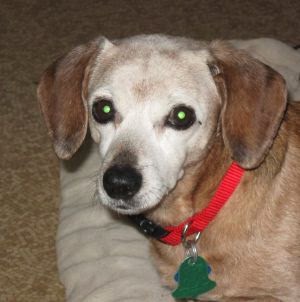 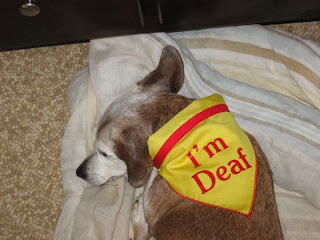 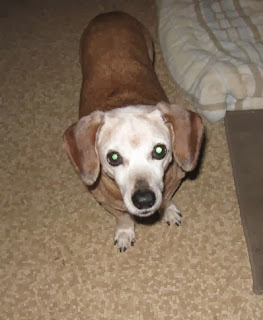 Posted by Donna at 9:08 PM No comments: Links to this post

Email ThisBlogThis!Share to TwitterShare to FacebookShare to Pinterest
Labels: Aggie
Newer Posts Older Posts Home
Subscribe to: Posts (Atom)
"It came to me that every time I lose a dog they take a piece of my heart with them. And every new dog who comes into my life, gifts me with a piece of their heart. If I live long enough, all the components of my heart will be dog, and I will become as generous and loving as they are." ~Unknown