Pulling back into shape...

All the old fogies here were really bent out of shape over Ariel's short stay with us this week.

Saturday morning, Randall took Ariel to meet up with her ride to San Antonio, and the relief around here was palpable. Soooooooooooooooooo happy to have things back to normal.

I never realized just how much the seniors don't want to be around a puppy...even an older one. A 10 month old dachshund has boundless energy. And poor Ariel actually got depressed and stopped eating because no one here wanted anything to do with her.

The two senior dachshund fosters, Aggie and Dixie, were the most affected. Dixie is quiet and timid and really didn't like being poked by a puppy. All she wants really is to be left alone with a pillow and blanket. She was mortified when she corrected the puppy. For all her senior pep at times, she really is a reserved and gentile lady.

Poor Aggie was bereft. She has some neurological issues to go along with her deafness, and she simply couldn't resolve the active puppy with her routine. She sat in the hall with her back to the bedroom and pouted. She just couldn't accept this.

Buddy wasn't really impacted by Ariel's stay except he couldn't move freely through the house, and by Friday night he'd had it. When we got ready for bed, he curled up and faced the trash can near his pallet. Usually when I get on the floor for a goodnight cuddle, he eats it up. Friday night he wouldn't make eye contact with me, and he actually growled at Randall when he was prompted to go outside for one last potty break. Randall said he thought for a minute he might bite. HIGHLY unusual for a very even tempered older gent.

So this little experiment in short term fostering was a mixed blessing. The foster parent reports Ariel is eating and having a blast with her other blind dogs. For us, well, I don't think we'll be willing to bring in another puppy unless it's urgent. Our guys just can't face the sort of behavior and energy the young kids present.
Posted by Donna at 8:10 PM 1 comment:

There is a rule to live by: Old dogs do not care for young dogs.

Randall and I are puppy sitting a 9 month old double dapple puppy until she can be picked up and transported to her foster home in San Antonio. Little puppy Ariel is very cute and very friendly and VERY energetic.

And the old dogs think that just really sucks.

She's also blind which means many bumps into old dogs. Coupled with much wagging and wiggling and kissing.

The collective group of seniors at the Hurst-Stukey Retirement Home are bent well out of shape.

Currently, Ariel is camping out with Randall in the den and so are Penny and Dixie. I figure it's better for the toothless dogs to be in that room. Penny is alpha and she's had a few things to say to Ariel, but with no teeth there's not much more that she can do. She's pretty incensed about the arrangement since she's usually in here with me (alpha dog goes with the pack leader who is me..so she's not a fan).

Dixie just thinks she's being horribly abused and she's had to chastise Ariel a few times. That worries her, so she is rather quiet and intimidated right now. Dixie is a meek and quiet soul, so to tell this puppy, "NO." isn't something she's too comfortable with.

All the dogs with teeth, Buddy, Skeeter and Aggie are sequestered with me in the bedroom and hall.

Skeeter is particularly not a fan of this arrangement since he belongs to Randall. It doesn't help matters that Ariel climbs in his basket. Skeeter is going to be pissed for a week.

Poor Aggie is all confused and insecure. She doesn't handle this sort of thing well, and she really doesn't understand a puppy that keeps running into her. Aggie sat in a corner of the den, facing the wall and pouting until we made this separation.

Buddy is OK with the arrangement because he's where he always is...on a pallet next to my desk. But he's not a fan of 9 month old bundles of energy, either. He's gotten all manly and authoritative and stomped around the den stiff legged...and considering he's rather stiff legged to begin with is saying something. He sort of looks like a Buddy body on stilts.

Fortunately, Ariel's stay here should be short. She was owner surrendered to Fuzzy Friends Rescue here in Waco and is now in the ATDR program. Not sure what her availability will be, but she is happy, friendly and not particularly handicapped from having no eyes. She should do just fine in a home not filled with geriatrics.

I've not written much about the senior foster failure, Penny.

Penny was a foster failure within the first 10 seconds I laid eyes on her. My words to my husband when she came around a corner at the vet clinic in the arms of a tech was, "Oh. She's a foster failure." "You don't know that.", said my husband. "Yes. I do." said I.

Penny is a gorgeous mahogany miniature longhair dachshund who is just this side of what I would look for in a show quality mini-long (OK. I would expect one to have teeth, but that's not Penny's fault.) and she makes my eyes very, very happy. She also has one of the happiest and most engaging personalities of any dachshund I've ever been around. She loves the world. She loves everything in it. And, of course, she expects that love to be returned. She waltzes through life with a wagging tale and doggy smile on her face. 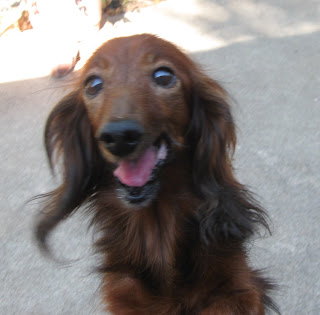 So last Thursday, we took her, Skeeter and the deaf Deagle, Aggie to a low cost spay/neuter clinic to update rabies shots (McLennan County is in something of a mini-epidemic where rabies is concerned).

I won't bore you with the long, tedious details of the back breaking wait, but 40 minutes before we were seen for the shots, I had Randall bring Penny into the clinic so she would be first in the shuttle from the van to the examination room.

Now, I'm sure you've sat with a dog in your lap at a vet clinic. And your previously happy, well adjusted dog turned into a quivering mass of "TAKEMEHOMERIGHTNOWIHATETHISPLACE!!!!" We've all been there, and despite the fact the folks working in the clinic have seen it before in almost every animal that walks in the door, you still feel embarrassed and you say things like, "I have no idea what's gotten into her. She's such a good dog and loves everyone."

Meanwhile your pride and joy is cowering behind your legs looking for all the world like it's about to be beaten half to death and then thrown into a pot of boiling water.

So that's what I expected. I knew Penny would come in and immediately turn into some unrecognizable creature. Like pretty much every other dog I've taken into a clinic does.

No. Not in the least.

For 40 minutes, I set with a wiggly, squiggly mini-long dachshund who whined and tried to jump off the bench and wagged her tail and wormed and squirmed. Everyone. And I mean EVERYONE from the badly behaved husky puppy to the terrified Am Staff to the patently unhappy cat to the woman with the walker to the kid with the cell phone to the woman behind the counter were there to see HER!!!!!!!!!!!!

And she talked about it the entire time. And anyone who made their way over to see her (and there were quite a few) got greeted like they were the most wonderful person in the entire world and it was even better because they were coming to see her. 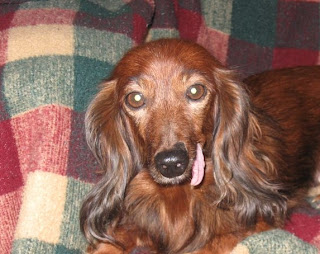 I just hope that everyone who had to be at the ABC Clinic Thursday morning felt the love. Because little Miss Penny did everything in her power to let them know how much she loved them. :)

Email ThisBlogThis!Share to TwitterShare to FacebookShare to Pinterest
Labels: Penny

Saying it with pictures...Buddy style

Buddy told me to tell the nice person who donated the two cases of Grammy's Pot Pie that he REALLY appreciates it and he's putting it to very good use.
Posted by Donna at 2:31 PM No comments:

Email ThisBlogThis!Share to TwitterShare to FacebookShare to Pinterest
Labels: Buddy
Newer Posts Older Posts Home
Subscribe to: Posts (Atom)
"It came to me that every time I lose a dog they take a piece of my heart with them. And every new dog who comes into my life, gifts me with a piece of their heart. If I live long enough, all the components of my heart will be dog, and I will become as generous and loving as they are." ~Unknown