Someone you don't hear about much....

This is Aggie. She's one of our permanent senior fosters through ATDR. Come Labor Day weekend, she will have been with us two years. 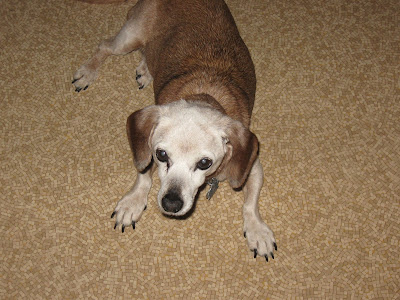 You don't hear much about her because, well, she's really rather difficult to live with. Fostering can sometimes be a crap shoot; sometimes you win and sometimes the house wins. The house won in this case.

We're not sure of Aggie's story. She came out of a shelter in Oklahoma to the shelter at Wichita Falls, and we brought her in that fall. Little Aggie is deaf, though we know she can hear some stuff. She's also got a neurological component as well. I jokingly say she was dropped on her head at birth, and that sort of describes how she acts.

She has never really interacted with people. At most, she sees us as food providers and doesn't understand affection. Occasionally she'll react when you pet her, but when she's had enough, she just sort of drifts off. Rather like a cat in some respects if the cat never had much to do with people during its formative years.

Her interactions with the pack can be trying at times, too. I don't think she was ever around other dogs before, and while I know the deafness contributes to some of the behavior, I don't think that's all of it. Fortunately everyone here is pretty laid back and they know she's "different" so they overlook most of her behavior.

Things are a bit more difficult with Aggie now because doggie dementia is setting in. She's on Cholodin and Anapryl, and both of those help a lot. Without them, I'm not sure what we would do. We've had senior dogs with dementia in the past, but Aggie's is particularly challenging because of her hearing loss and people/dog skills.

But she's here. We'll provide a home, love and food for her for as long as she needs it. She's safe, and when she's ready to go to the Bridge will let her go with a hug and a kiss. She's been safe with us for two years, and I know we've given her everything we could.

Email ThisBlogThis!Share to TwitterShare to FacebookShare to Pinterest
Labels: Aggie

Add comment
Load more...
Newer Post Older Post Home
Subscribe to: Post Comments (Atom)
"It came to me that every time I lose a dog they take a piece of my heart with them. And every new dog who comes into my life, gifts me with a piece of their heart. If I live long enough, all the components of my heart will be dog, and I will become as generous and loving as they are." ~Unknown