Loving an old dog...or even a young one

Sometimes things don't work out quite as planned.

Ms Pickles, not-so-long-past resident of the Irving shelter is now residing at our house in Garland.

We picked her up from Veterinarians Dental on Wednesday, and were greeted with the news that the estimate for Pickles' age is 5.

Well damn. We do seniors. Five stretches it, but what are you going to do? You've committed to foster, and you won't back out. And really, Pickles could be a bit older. Say maybe 7. Still that's a far ways away from the 12 or 13+ we were hoping for.

That said, are you going to turn this face down? 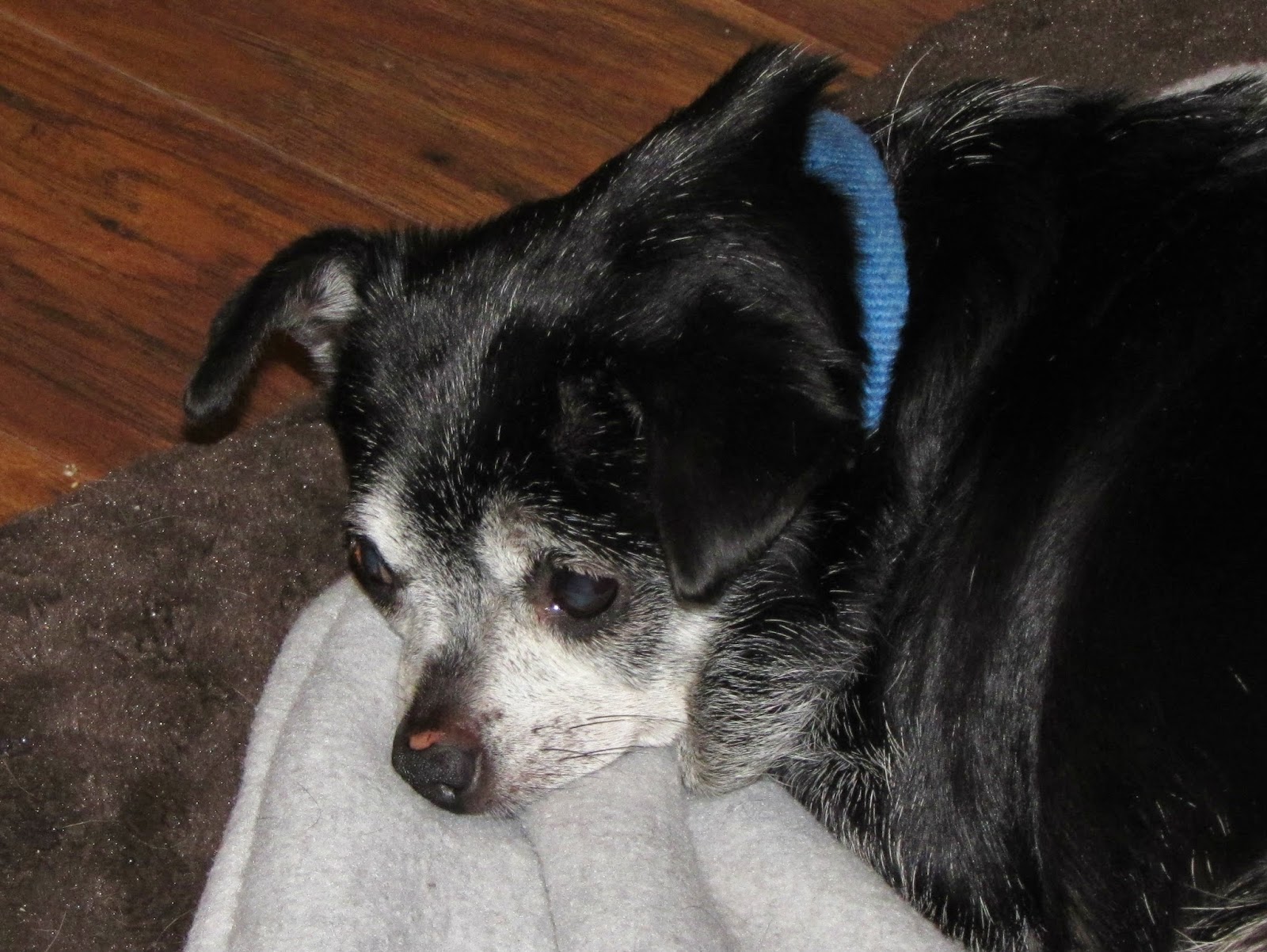 So we're stuck, because we can't say no to a face like that either. Not to mention she's a sweet, sweet girl.

So here's a bit about Ms. Pickles. She was brought as a stray to the Irving shelter. Now whether or not she was really a stray or just turned in by an owner who told them that, we don't know. What we do know is this girl has been VERY well cared for.

Great teeth and obviously a good dental history. Not spayed, but she is now.  Coat in very good condition. Ditto her nails. Heartworm negative. And exceptionally fat. As in 3-4 pounds overweight. And for a dog who should weigh somewhere around 8 lbs, this 11.8 she's toting around is a LOT of extra poundage. I can't feel ribs, hips, shoulders or spine. So first things first; Pickle is dieting.

She was obviously well loved by someone, and if she was on the streets, it wasn't for any length of time.

Pickles appears to be housebroken, though around here it's hard to say with houseful of seniors with weak bladders. She does readily go outside. She does have the first stages of a collapsed trachea, so I don't believe she's leash trained, but getting the weight down should improve that considerably.

She's good with other dogs. Slid right into the pack here with only some issues with Skeeter (hubby's very possessive male Chihuahua) that everyone has at first. Fine from all appearances with cats. She met my OSH mix with curiosity,  and has really only been over familiar once or twice.

This girl does have some separation anxiety, but that's completely understandable coming from a shelter. We'll work with her on that, and I hope she can overcome it with just a little effort. She loves people and wants to be with them. It pains her to be apart, so we're going to work on that confidence level.

She's also discovered a love of her crate. Which is absolutely outstanding in my book since I'm a firm believer and user of crates. I had to move hers into my office an hour ago, and she made a beeline for it as soon as I did and hasn't budged but once. This should be a real bonus when it comes to working through her anxiety. She's got a spot that's hers, so that should help her comfort level.

We'll spend the next little bit learning about this girl, but we may have a very rare creature here...a healthy young senior in the Bark N Rest Retirement Center program. If all goes well, she will be adoptable to the right home.

Email ThisBlogThis!Share to TwitterShare to FacebookShare to Pinterest
Labels: Pickles